I hope you and your family had a wonderful Father’s Day.  Seems dad’s just don’t get enough special days though out the year.  I heard recently some folks are trying to do away with calling it Father’s Day and have put forth legislation to change the name to “Parents Day” so it is more “inclusive”.  Such a shame though to take the focus away from Father’s.

We spent the whole weekend celebrating Father’s Day.  Why not?  He works so hard to care for the needs of our family.  Dedicating this entire weekend just to him pales in comparison.

On Saturday, Daddy opened a couple of gifts we had picked out and some that were made for him.  One of the special gifts this year we have been focusing on has been learning “skills” from outdoor survivalist Creek Stewart.  For Dad’s birthday a few months ago, we got him a bimonthly subscription to Apocabox, and he will get six of these boxes during the year.  So for Father’s Day, we stayed with that theme and we ordered him a bow drill from Creek Stewart, so he can learn to make friction fire, also a folding saw for cutting tree limbs, and a Special Edition Apocabox.   However, the Apocabox had not yet arrived before he opened his gifts Saturday morning so I figured the box might be here by Monday.   We told him it would be coming, and we gave him his other gifts and he was quite pleased.  We gave him the Creek Stewart bow drill, a collection of some fire tinders that were hand collected by one our boys including homemade charcloth he made, an extra large coffee cup that says “make it happen”, a swiss army military style clipper set, and his favorite chocolate pecan turtles.  One of our sons is working on a special paracord bracelet that is still in progress, but not finished yet.  Another one of our son’s made him a beautiful leather bag.  I will post a story soon about him creating the bag. 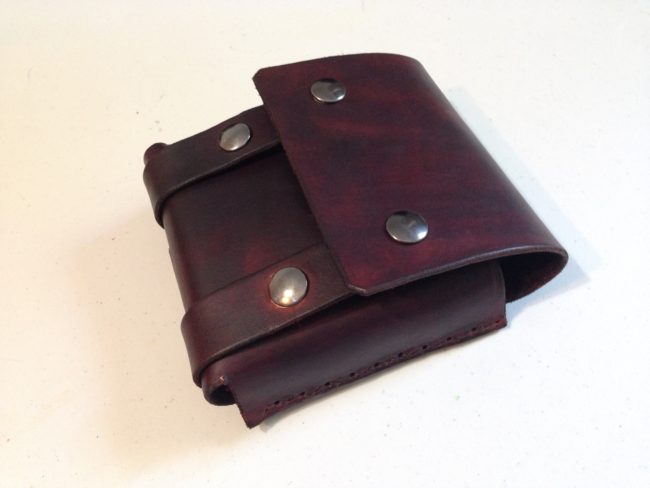 We got ready to leave to take Dad to lunch.  We had a few plans including taking him to lunch at a Mexican restaurant and then take him to Cabela’s to get a new fishing pole.  To round out the special weekend, we planned to take him fishing on Sunday afternoon.

Just as we were planning to leave the house Saturday, the mailman brought a package.  My husband met the mailman in the driveway and he was beaming ear to ear when he got back in the house with his box.  It was the Special Edition Apocabox from Creek Stewart, and he (and our boys) couldn’t wait to open it.  I will post a story soon about this box. 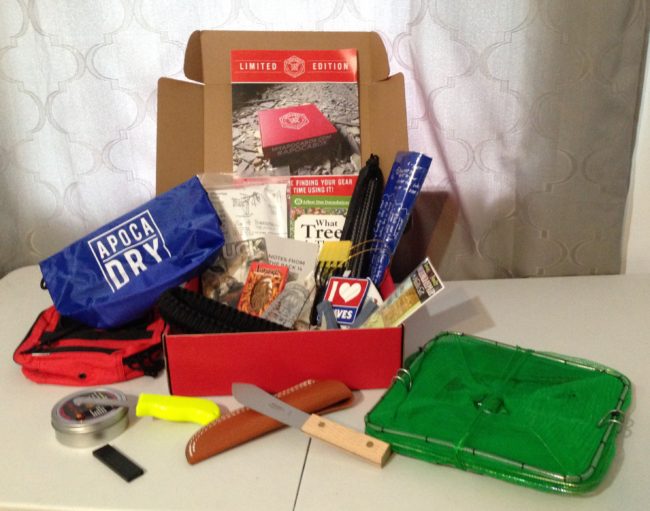 After looking through his Father’s Day gifts and spending the morning together, we went to lunch.  We ate at a place we have eaten at a few times for special occasions such as birthdays.  We had actually been there two weeks earlier to celebrate our oldest son’s eighteenth birthday.  They make delicious tasting Mexican food and our whole family enjoys it. 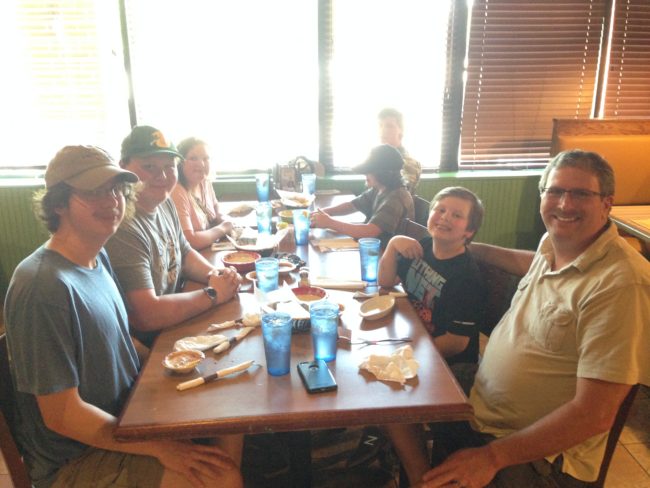 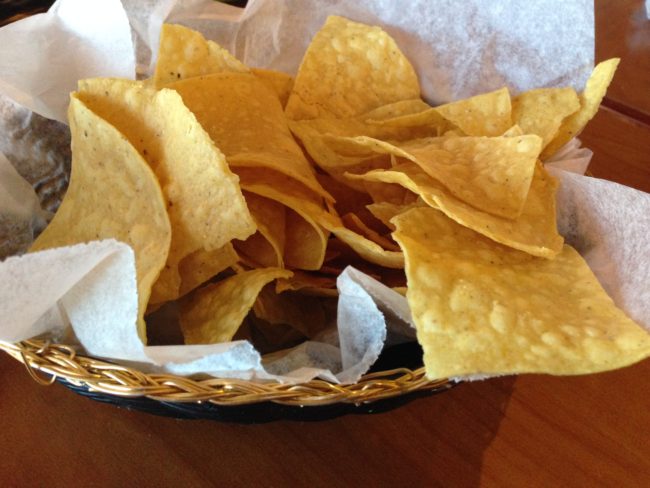 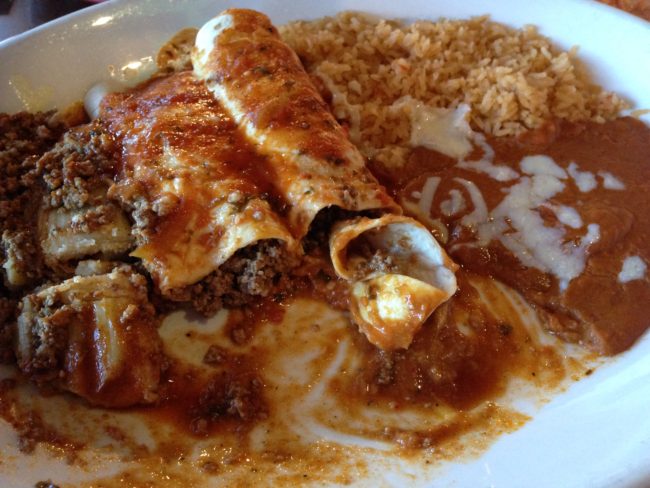 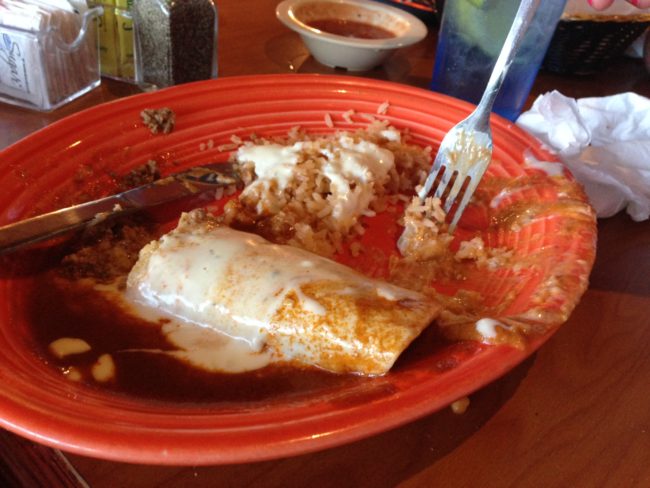 After lunch we took Daddy to Cabela’s to look around and see if he would like a new fishing pole and gear.  Our family has some fishing gear, but with eight people in the family, and with little ones, some things get broke and we all share what we have, and sometimes Dad is so busy fixing the poles, lost gear, tangled gear, or re-baiting them etc, that he doesn’t even get to fish.  We thought it would be nice to get a new pole just for him.

Cabela’s is a very interesting sporting goods store.  On this day, they had set up a pool in the parking lot and were giving Kayak lessons. 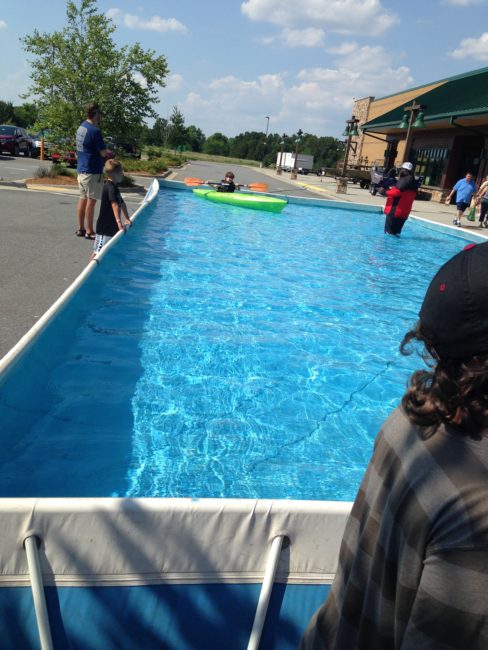 Another cool feature inside the store are the wildlife animal displays and the huge aquarium. 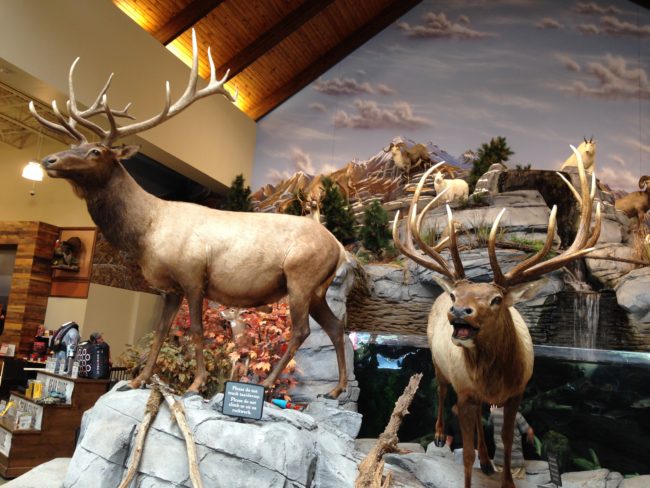 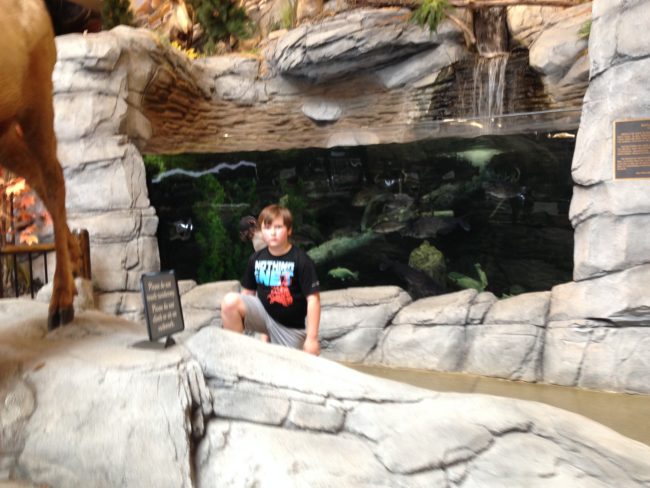 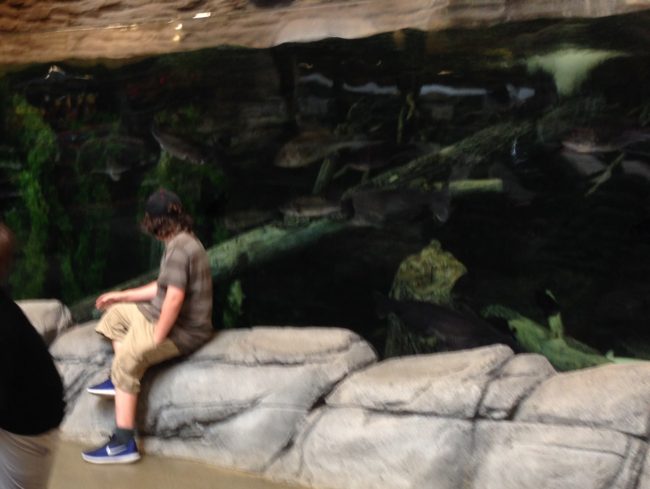 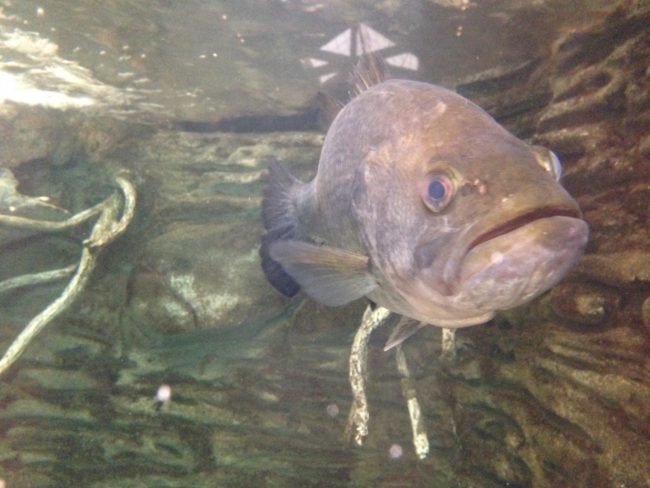 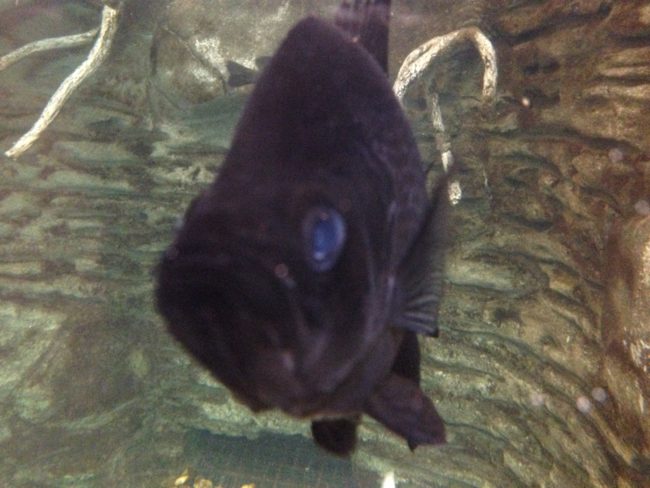 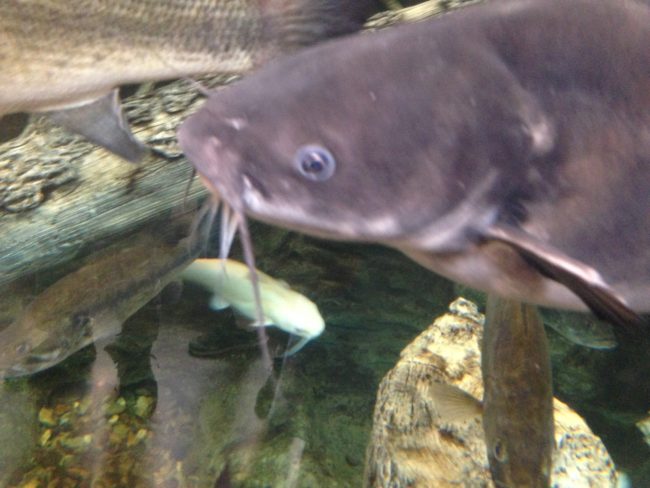 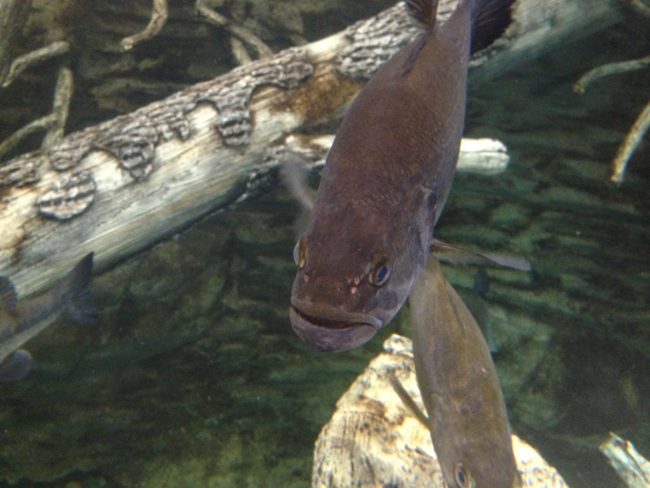 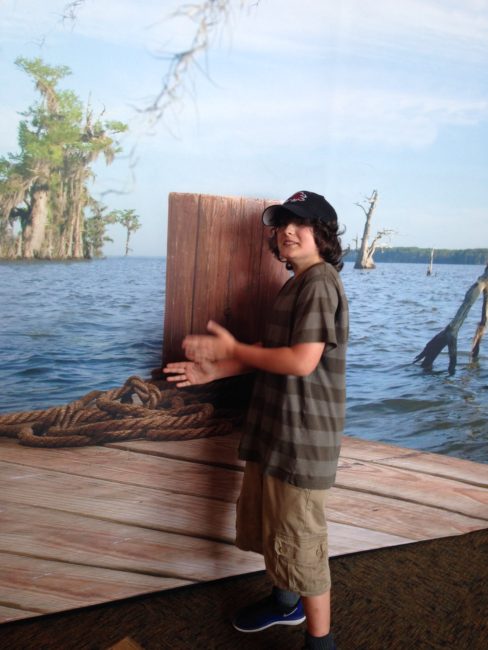 But at the end of our time at the store, the only thing he really wanted was a tee shirt and a flashlight.  So we came home without a fishing pole, but we enjoyed spending time with him anyway. 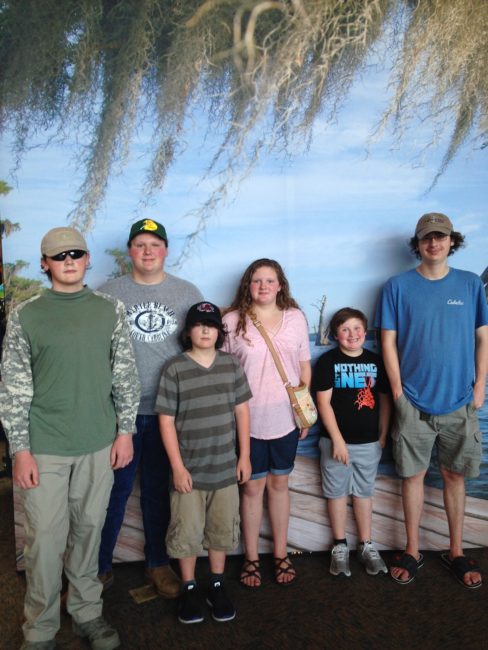 After we got back home Saturday, we ate some Father’s Day cake our daughter made.  Then we spent time in our back yard trying to make a fire by hand with Dad’s bow drill. 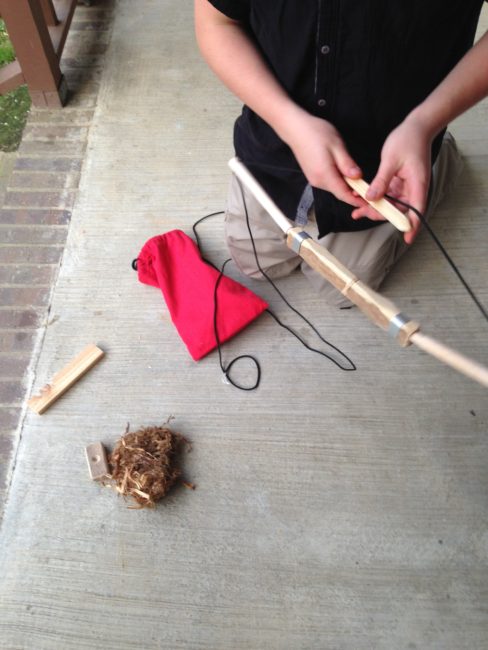 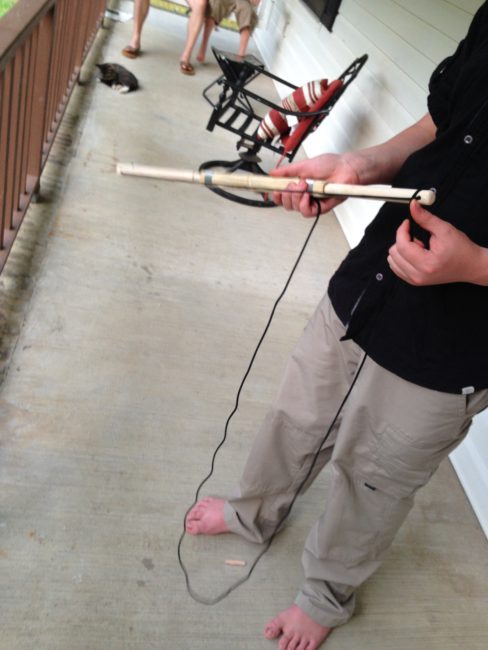 My husband had our 13 year old son assemble the Creek Stewart Take Down Bow Drill.  He was thrilled to get to assemble it. These bow drills are custom made by hand.  They are made so you can disassemble “take down” the bow and put it into your backpack to carry with you on camping trips.

My son had also made a tinder “nest” for this special occasion.  He is learning so many skills and I am very proud of his efforts. 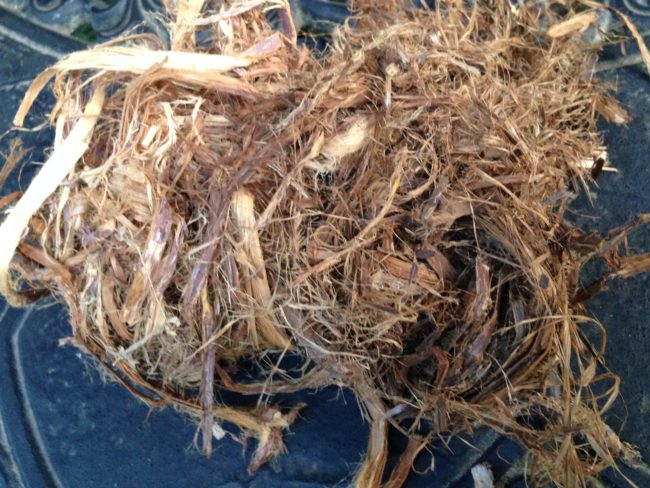 After it was assembled, they headed to the back yard to practice.

The two of them worked together to run the bow drill. 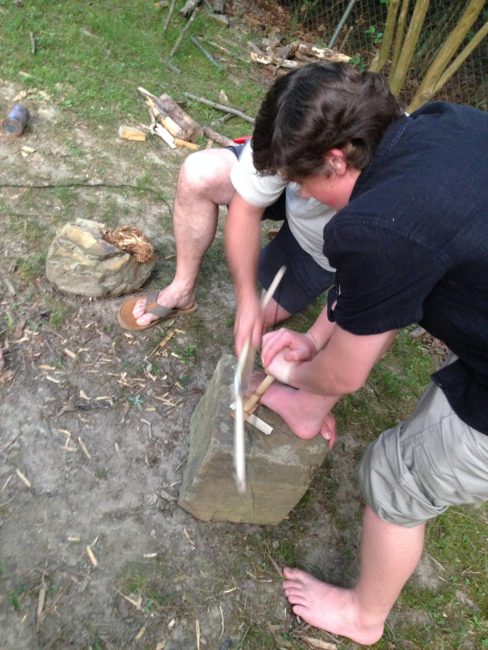 They had smoke coming from the friction several times.

But each time they would check for a “coal” from the smoke, there was not a coal. 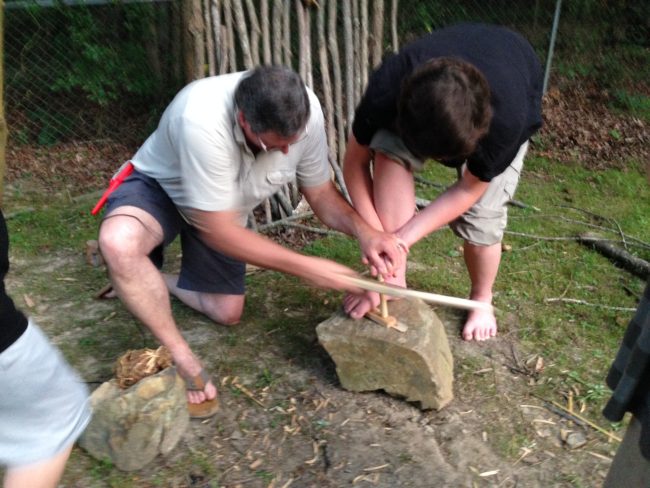 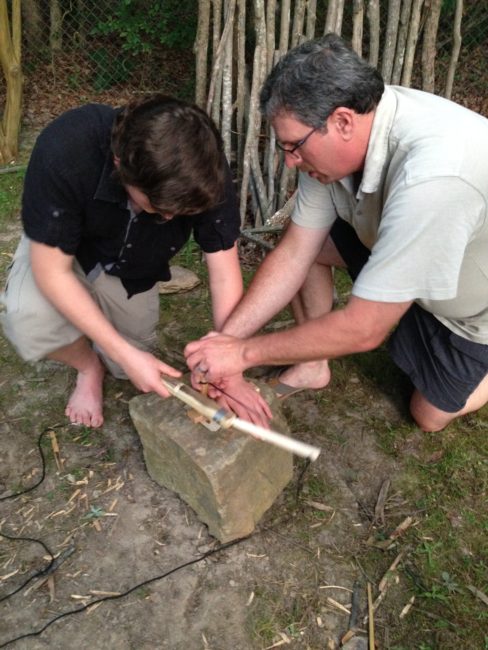 But they did have lots of ground up and smoking wood dust, created by the friction of the two sticks, that could become a coal in the right conditions.

I don’t know if you have ever tried to make a fire by rubbing sticks together, but it is not easy.  They tried for a long time.  They tried up on a table so it was easier on my husband’s 50 year old back.  But when that wasn’t successful, they moved it to the ground.  They also tried making it on a flat rock.  But it proved to be too difficult this evening to get a friction fire going.  We plan to re-watch Creek Stewart’s video about how to use the bow drill to create a fire and then “make it happen”. 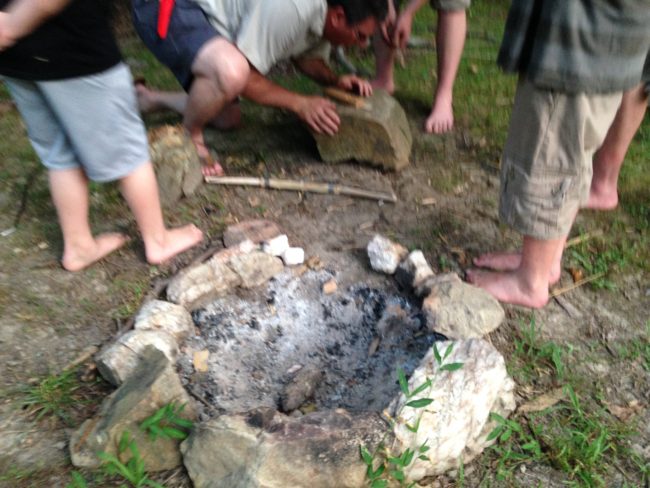 Later after dark, the family all went back outside and played with flashlights. Dad got out his new flashlight, and the boys got out their flashlights and they all played around seeing who’s light could shine the brightest out into the yard and go the farthest down the driveway.  As they get bigger and older, it seems Dad might be feeling a bit challenged.  But Dad’s new light won the “farthest” competition with the flashlights and he felt very proud to still be the top dog!

Sunday morning, we got up and made coffee and pancakes.  Knowing we had plans to take Dad fishing later, we played around the house for a bit, and we watched a few videos together.  There are some really good weekly videos on youtube that show current events each week.  There are also some wonderful bible teachings.  When we have time, if we are home on a Saturday or Sunday, we watch some of these bible teachings, and videos that show current events worldwide, including world wide weather events (hurricanes, floods, volcanoes, earthquakes, mudslides, etc), and some that focus on events in the USA.  It is a good way to catch up on the news from a Christian worldview, something you don’t get on regular TV.  It helps to see what is happening in current events, and understand from a Christian worldview what is happening and how it lines up with bible prophesy.  We are told in the scriptures to watch and to understand.  We are living in the end times, and though we don’t know the day or hour it will all take place, I would encourage everyone to try to keep a watchful eye however they can and learn as much as they can.

Then we headed outside to load our fishing gear and cooler into the van and headed out to find a fishing spot and to enjoy the rest of the day with Dad.  We stopped along the way to get a bag of ice, bread, lunch meat, chips, bottled waters and Gatorade.  We planned to have a lunch picnic.  It was 95 degrees out today and we wanted everyone to stay hydrated.  We drove around for about two hours looking for just the right fishing spot. 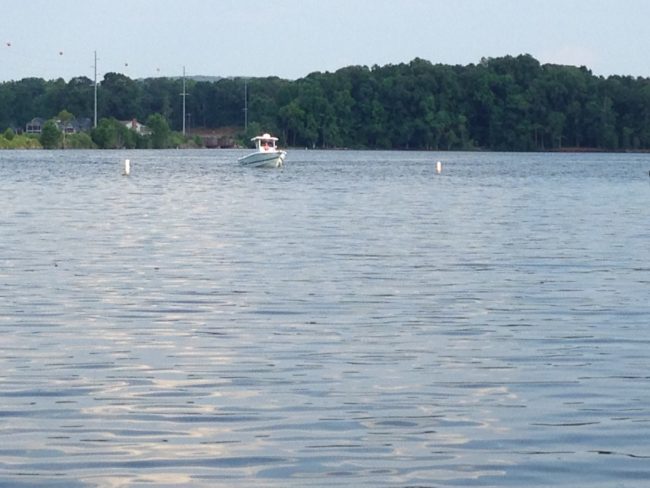 Finally we found a nice little spot along the water that faced away from the sun, and it had some shade trees.  This seemed like a good spot to put our fishing lines in.  Shade trees can be a blessing, but you can also get your lines tangled in them when casting.

But it was so hot outside, we were sweating while just standing still, and having that little bit of shade from the trees was important.  Eventually we realized the fish don’t like the heat either and we were not catching anything.  After several hours of trying on our part, the fish were just not biting on our lines, other than an occasional nibble.  Then, not long before dark, we had a Father’s Day miracle. 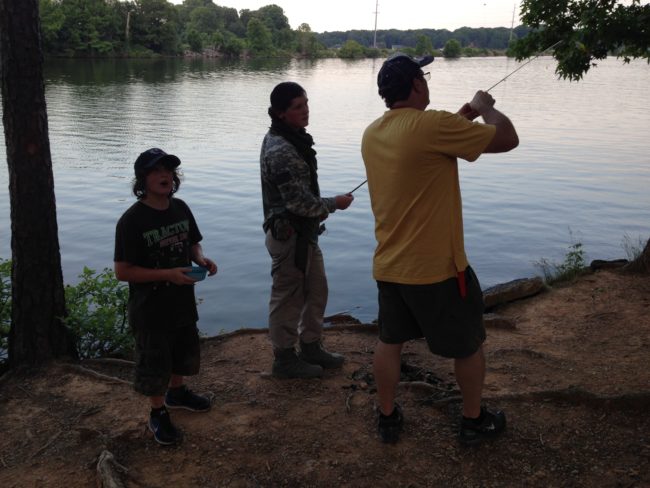 We didn’t get home until very late, and we were all tired, but it was a great day.  Despite the heat, we had fun just spending time together as a family and we enjoyed each other’s company and enjoyed the special day and our special Father’s Day Weekend with Dad.