My kids get excited about reading great books!  They were thrilled when we were recently asked to review Adventures of Rush Revere #1 New York Times Bestselling Book Series by Rush and Kathryn Adams Limbaugh.

American History comes to life in  Adventures of Rush Revere Book Series where a fictional history teacher named Rush Revere takes middle school kids on a journey back in time to explore true and exciting events about the foundation of the United States of America. 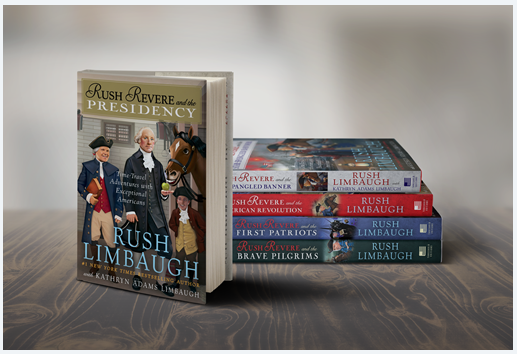 Illustrated: real photos of historical documents, famous people, events, and locations, as well as fictional illustrations of Rush Revere, his horse and students.

Available in English (Rush Revere and the Pilgrims is also available in Spanish).

Recommended for ages 8-12, but older students, and even the entire family, will enjoy these books too. 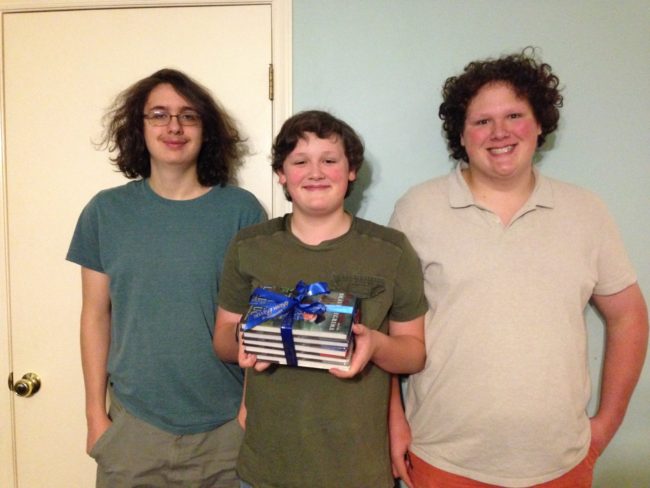 We received all five books in the Adventures of Rush Revere Book Series for this review. 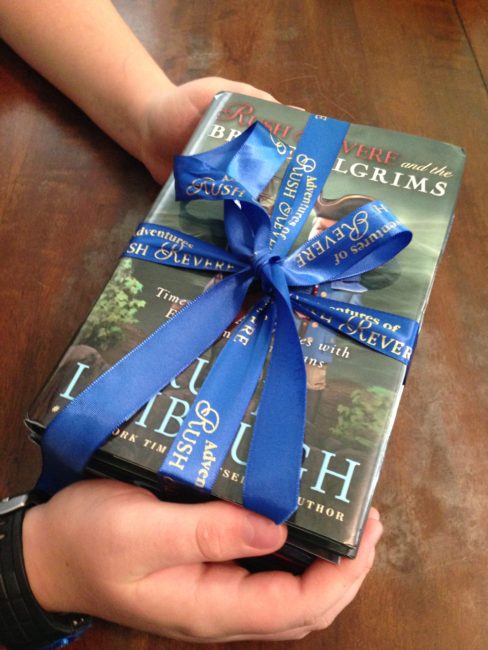 In each book in this series, fictional History Teacher Rush Revere travels through time to the past to share the true and exciting events that helped to shape the United States of America. 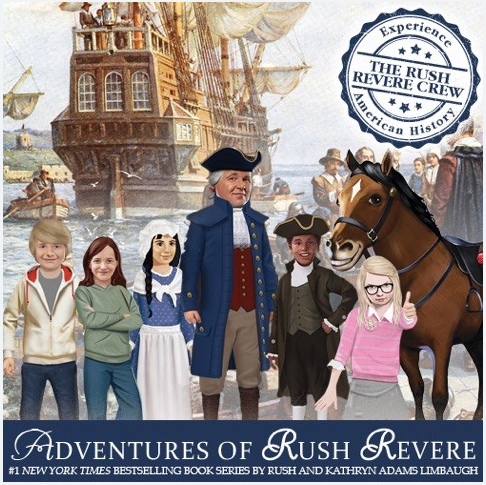 Even though the teacher and his talking horse, the students, and time travel are fictional, the rest of the historical events in these stories are true.  Some of the illustrations are of the fictional characters, however many of the photos are of actual real people, real documents, actual locations where events took place, and you can still go visit many of these locations today. 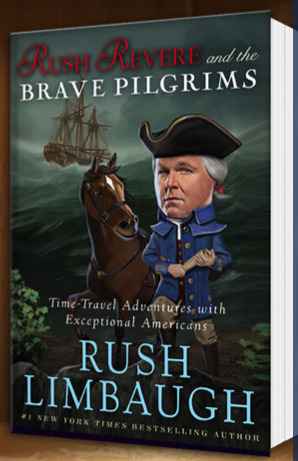 Book 1: Rush Revere and the Pilgrims

This story begins on the ship traveling to America called the Mayflower.  The story follows the Pilgrims through their first winter in the New World. American History Teacher Rush Revere time-travels to the past with two students to see American history first-hand.  In this book kids learn about building forts, sword fights, explorations, and learn about people like Squanto and William Bradford.  Kids will also learn about the first Thanksgiving.  Featured in the book are full color illustrations and original documents from this time in history.

After reading this book, your kids will want to keep reading all of the books in the series. In this book kids are introduced to Rush Revere who is an American History Teacher.  Rush Revere is assisted on his journeys with a talking horse named Liberty.  Together they discuss facts of history and take kids on fascinating journeys to the past to see various events unfold.  This this time-travel theme continues through each of the books in the series. 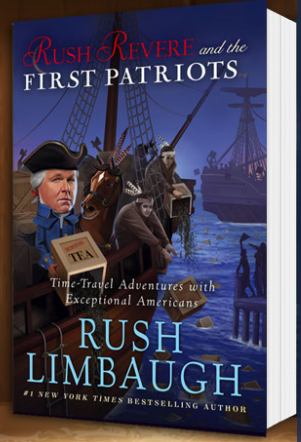 In this book kids learn about the First Patriots including exceptional Americans such as Samuel Adams and Patrick Henry.  They also learn about struggles with King George III from Great Britain.  This book is filled with illustrations and documents that bring this time in history to life.

I was surprised to learn a few of the details in this book were different or left out of my studies when I was growing up.  For example, I didn’t know that the symbol of America was a female rattle snake.  I thought the first symbol was an eagle.  But the rattle snake, eagle, and pine tree were the first symbols of our nation.  The first flag that represented separation from England included thirteen stripes and a rattle snake, not stars. I had always been taught about the stars, but not taught about the snake.

We were inspired by this book to look up a few details for further study about the snake symbol that came to represent the “American spirit” during the Revolution against England.  On Wikipedia I found the serpent drawing (mentioned in the book) that Ben Franklin used in his news paper with the phrase “join or die” that inspired the 13 colonies to become organized against the attacks from French and the American Indians, and a few years later helped them become united and fight back against the King of England because of unfair treatment. 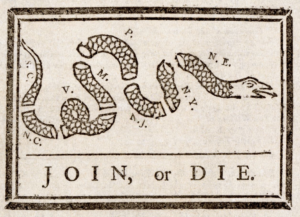 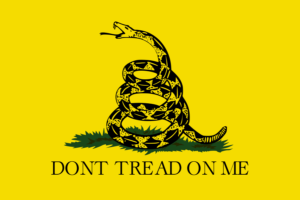 We also found another serpent inspired flag called the serpent and stripes, that is still in use today.  This is one of first flags of America and is still flown on navy ships.

Before reading Rush Revere and the First Patriots, I had never heard of the serpent symbol representing the US, but after doing a little research I have learned it has been in continuous use for 266 +/- years since Ben Franklin began using this idea to help the colonists become organized to fight back against any oppressors both foreign and domestic. 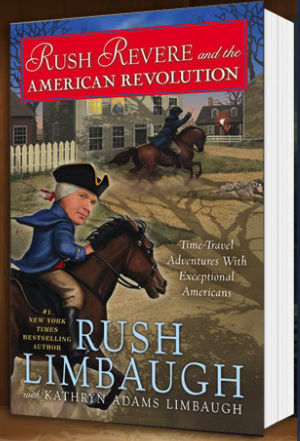 This book focuses on the life of the son of a soldier.  His father is deployed overseas.  His mother is worried about the affects this is having on her son. Eventually the boy learns why freedom is so important and to value the sacrifice his dad is making for him and the future of the country. In this book you learn about Dr. Joseph Warren, John Hancock, and George Washington in addition and learn even more about the journey for freedom in American history. 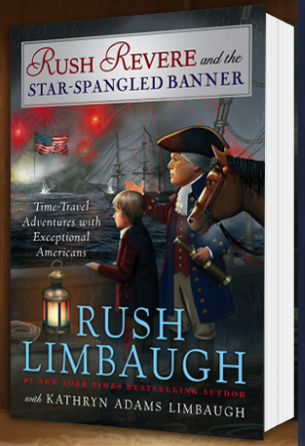 In this book, kids read about national landmarks including the Washington Monument, the White House, and American government.  They learn about the writing of the national anthem, Dolley Madison, pickle barrels, museum guards, Redcoats, American patriotism and more. Included are full color illustrations, photos, and historical documents. 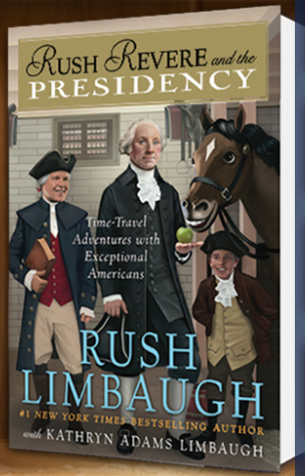 In this book kids learn about the American elections, American leadership and the early presidents, vice presidents, first ladies, Washington, Adams and Jefferson. They also follow along as one of the kids in the story runs for student-body president and learn what skills are required to be successful and the value of serving others.  Full color illustrations, photos, and historical documents related to this time in history is included.

In addition the history books, the Adventures of Rush Revere website offers kids an opportunity to expand on their learning.  They can join a book club, enter contests, complete activities, and learn even more.  They offer a few fun online games and activities, and additional resources.  You can also read about the author and additional information that inspired the characters.  In the Homeschool Depot (also the Education Depot), there are student study guides that go along with the books and additional resources for teachers. 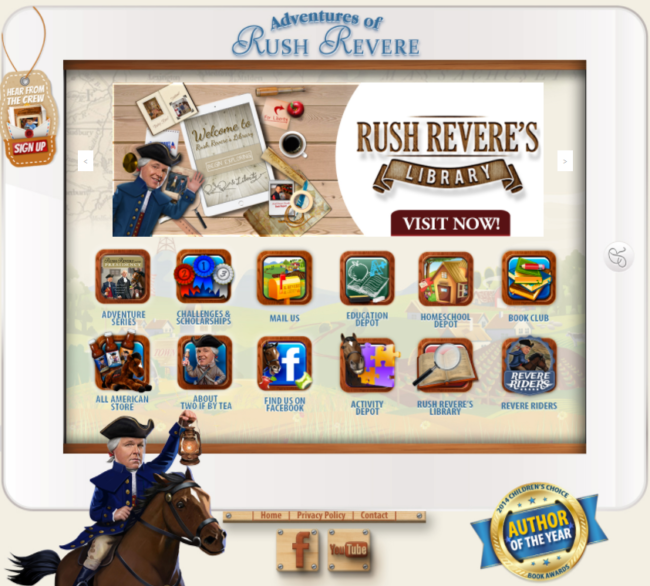 My sons are enjoying reading these books and learning about American History.  In addition to reading at home, they have also taken them in the van to read on long drives.  Giving kids a book to read while you take a drive is a great way to get them to sit still and read, especially for boys because they always seem to have tons of energy and don’t always want to sit still. These books are so interesting that my kids wanted to sit still, read, and couldn’t wait to find out what happens next.

I am looking forward to re-reading these books again with all of my kids, and using the study guides and activities as unit studies for our American History this fall.  I would definitely recommend these books to everyone! 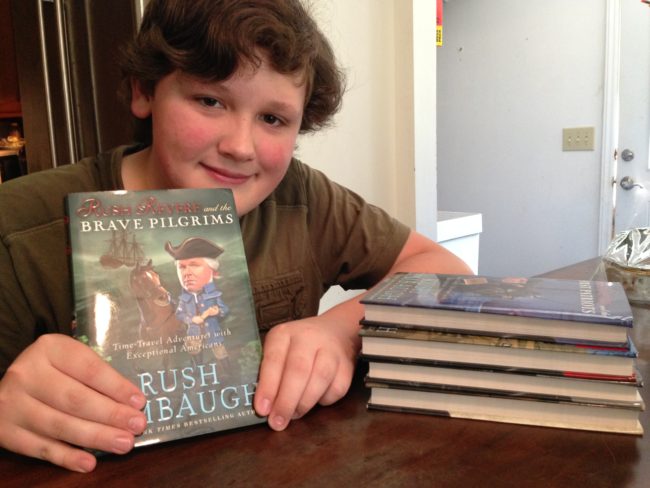 Perhaps by reading this book series, you and your family will be inspired to visit some of these locations, or do more explorations and learning adventures to learn more about the events, people, and places that helped to shape our country.

Be sure to check out what other families on the Homeschool Review Crew had to say about using these books with their kids.